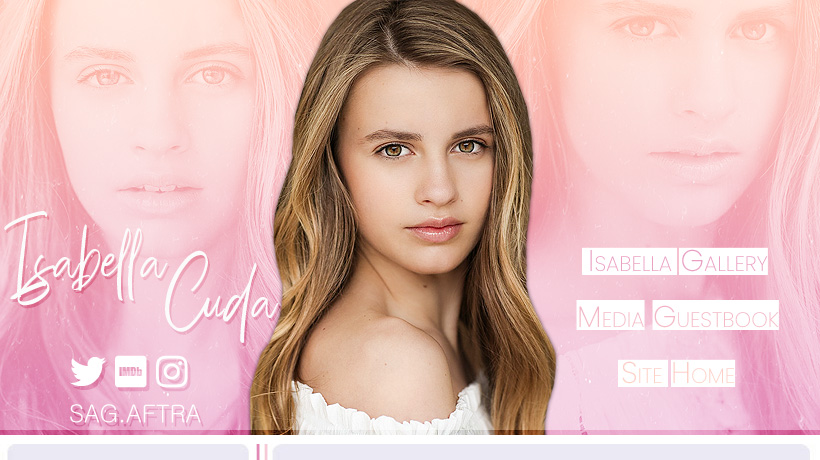 Isabella Cuda is a 17 year old Swiss-American actress from the Los Angeles area. Born with Spina Bifida and a tethered spinal cord it was said she would never walk. After several surgeries by presidential candidate Dr. Ben Carson, Isabella endured her latest spinal cord surgery in 2018 and had reconstructive foot surgeries in 2020 and 2022. 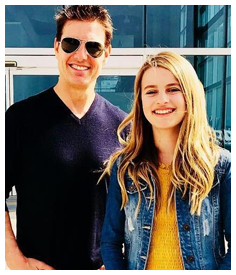 Isabella Cuda © 2016-2022
This site cannot be reproduced in any form without the permission of the webmaster. No copyright infringement is ever intended. This is the Official Site for Isabella Cuda, all images are property of the Cuda family or their respectful owners.
Welcome to the Official Site for Isabella Cuda ♥. You may recognize Isabella from one of her appearances on series such as Criminal Minds, Sam & Cat, Glee, or her role in the film Eternal Salvation. Here you will find all of the latest news and up to date information about this talented young actress. For Industry Professionals looking to learn more about Isabella, please click on her name above for an overview of information.

15 Oct 2022
Magnum P.I.
Isabella has been fortunate to work in a variety of locations across the state throughout her career, but one of her most recent projects took her on a flight over the ocean to the gorgeous Hawaii! She appeared in an episode of Magnum P.I. this year in the role of Sierra, a young girl facing a health crisis to which treatment is only available on the mainland...at a high cost. Who knew that this young girl's health problem would get caught up in a ring of illegal activity, but that's how it goes in the world of Magnum and Higgins. Isabella's scene aired in the episode as the team meets Sierra after a mysterious large cash donation was discovered by the nun helping organize the fundraising to get Sierra her needed treatment. Hopefully many of you have seen her episode, and if not, CBS has it available on Paramount+!

With Magnum P.I. filming in Hawaii Isabella was off to the island to film her episode when she learned she booked the role! She was thrilled to film on location, and the added bonus of a mini vacation definitely made it work in name only. There was definitely no boredom or exhaustion to be had when working with this fantastic team involved in putting each episode together. Jay Hernandez and Perdita Weeks were wonderful to work with, and the crew were very generous and supportive in making sure Isabella had everything she needed and was prepped to film. When not on set, Isabella took time to explore Hawaii, relax, and take in all she could of her time spent there. Thank you to everyone involved for the experience of working on the show, and Isabella is looking forward to seeing where her next adventure lands!

12 Mar 2021
Bunk'd
If you're a Disney Channel fan hopefully Bunk'd is on your watch list because Isabella was in last week's all new episode! She played the role of Kit, a patient at the Children's Hospital who bonds with Destiny over doing pageants. When Noah takes an interest in Kit he isn't truthful about his own interests which leads to telling Kit he will perform for the children. One confession later, Kit shows how it's possible to understand and forgive someone, and there is a restart on a new friendship.

Isabella had a fantastic time working on the set of Bunk'd. It was a whole lot different filming a television show this time around, but she was happy to be back at it and doing what she loves. The cast and crew were very welcoming and among the busy work schedule there was still opportunity to grab some behind the scenes photos which have been added to the gallery! Thank you to everyone for making this a wonderful work experience, and hopefully everyone has a chance to check out Isabella's episode!

31 Mar 2020
Bed and Breakfast
What happens when a group of of pre-teens have a tour guide led adventure and stay overnight at a bed and breakfast? If a game of Ouija followed by the scariest moments of their lives crossed your mind then you are all set to check out Bed and Breakfast! Isabella's latest short film has recently been released and her character Kara has quite the different adventure than the one she had been expecting when heading out on her group trip. After being left to turn in for the night by their tour guide this group of friends sets up a game with the paranormal, and what happens next is something neither Kara or any of her friends were anticipating. A copy can be found in the media section, and congratulations to everyone involved on the film's win for People's Choice as well as being in the top three for the Judge's Award during its film festival submission!